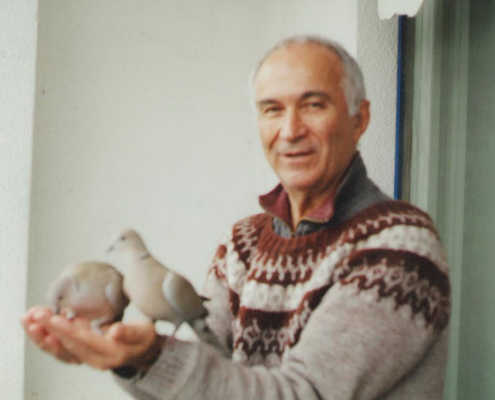 THE MEANING AND EVOLUTION OF MY ART

As a creative artist I have covered the road from naturalism, realism, associative art, abstract form, photography, to the motiles.

In naturalism and realism I dealt with object after nature, in other words with the figure.

In associative art the figure gradually freed space for object after spirit. The human figure dissolved, disappeared and I made sculptures called objects of ideas and concrete sculptures. Totally liberated from object after nature I was able to objectify the state of the spirit.

Through exact sculptures I tried to resurrect classical beauty and faith in man. I accepted the positivistic relationship to life and that was the moment of my disillusion. I wanted my works to be the elements of new nature – of the cities, to be in the squares, streets, in interiors, so that their presence could emanate the charm of spiritual beauty and optimism and make the city a place for a happy, humane togetherness; I did not want cities to look like permanently smoking concrete rubbish dumps… Instead of the human dream of togetherness and happiness for everyone, cities are rapidly becoming places where people are lonely and alienated.

However, wishes are one thing, and realty is quite another. Man’s nature, the law of the stronger within him, the immoral, irrational and absurd human behaviour weakened my faith in man and brought only doubt and distrust.

In 1972 I took leave from my faith in man in a conceptual way. It was then that I made the cycle of photographs – Life, Space, Time (1972-1976). I drew in the sand the gallery where I exhibited my works. Then I buried them in the sand and symbolically said farewell to the positivistic relation to life.

In front of me was a road without an exit, without hope, the road of despair and nothingness. My work is imbued with the distrust in man, first in the photographs and later in the drawings and the first motile. I do the same today but convinced that one can have more benefit from the doubt than from unfounded optimism.

I have been inspired with eternal conflicts, sufferings, bloodshed… of the human kind. Caused by numerous contradictory and meaningless ideologies and religions, offered to us on this planet as HUMANITY and HEAVEN, while in fact someone is planting CHAOS and creating HELL…

If I add to this the closed circle produced by Eros and Thanatos, within which humans live their lives, my inspiration for the motiles is infinite.

I feel tremendous fear from such a contradictory human behaviour and my motiles are born from that fear as acts of bravery and psychological relaxation.

More and complete information can be found in the monograph study on MILIJA NEŠIĆ, prepared by Ivana Simeonović Ćelić and Savo Popović. The exhibition and the monograph celebrate the prestigious award STOJAN ĆELIĆ, artist, art critic and theorist, awarded to Nešić in 2016.

The exhibition is open to the public and will be open until September 30, 2018, and the monograph will be launched on Friday, September 14 at 8:00 p.m. in the ZEPTER MUSEUM.