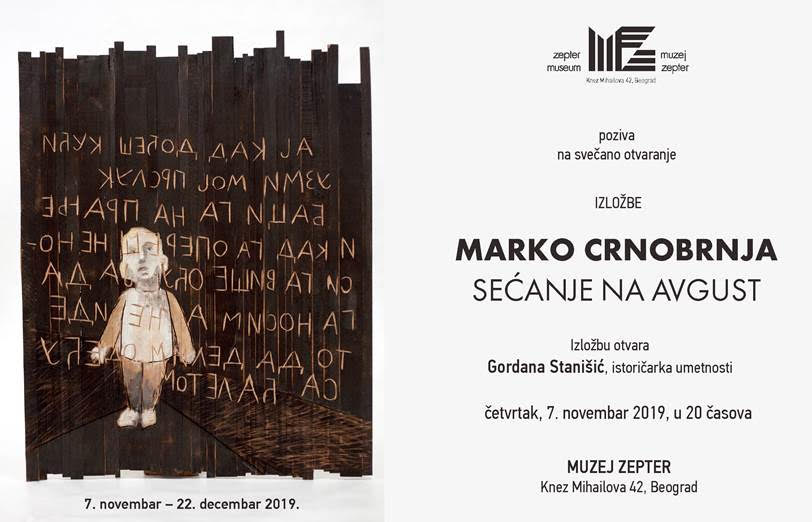 Since 1999 he has had a number of solo shows in the country and abroad.

Since 1998 he has participated in a significant number of group exhibitions in the country and abroad.

Crnobrnja has received several awards since 2009.

Since 2003 Marko Crnobrnja has been making educational sculptures primarily for his own children, so that he, as an (in)experienced young parent and also a young sculptor, could master and reconcile within his own personality two serious roles he has been attributed. From his position of an artist and from the position of a father he has realised sculptures, which, as fragmentary scenic images become essential means of pedagogical rhetoric, authentic interactive instruments of caution and education, and also of a specifically utilitarian aesthetic communication. Verbal communication has been replaced by illustration; the artwork is introduced as the basic vehicle that participates in the real world outside exclusively artistic space. Crnobrnja established a dialogue with his children instinctively, easily and directly, pedagogically acceptable and plausible from the very beginning – each narrative whole is functionally reduced to utmost simplicity, while the elements of the content of intended messages or advice, i.e. structural elements of the sculpted entity are in an adequate, simplified relationship, without superfluous details that might redirect attention – everything is in the context of direct perception and clear understanding.

The new series of sculptures by Marko Crnobrnja refer to different situations of universal content through rephrased moments from his personal experience. The child is still a charming promoter of artist’s discourse, resourceful initiator and protagonist of innocent and even less innocent pranks, an adroit manipulator of parental love and worries, but also at the same time a naïve victim of pedagogical punishment and bans, of petty and important duties that disrupt the simulacrum of carefree manoeuvring. Two autonomous wholes, genuinely different situations, two opposing entities that Marko (un)intentionally introduces into the dialogue system – on the one hand, 14 wall objects from the cycle August with framed scenes of a child isolated in the trap of his/her own troubles before the repeated exam (in mathematics, Serbian language, visual art education, conduct…) fulfils the form of apparent parental presence, and on the other hand, of parental real absence in the series of sculptures Unwelcome Outcome, where the child, relieved of all those obligations, surrenders to his/her temptations and adventures following the principle “I can and will do everything”. August has generally been a good fairy to some and a gorgon to others.