You are here: Home1 / The museum2 / The building

FROM A BANK TO A CULTURAL INSTITUTION 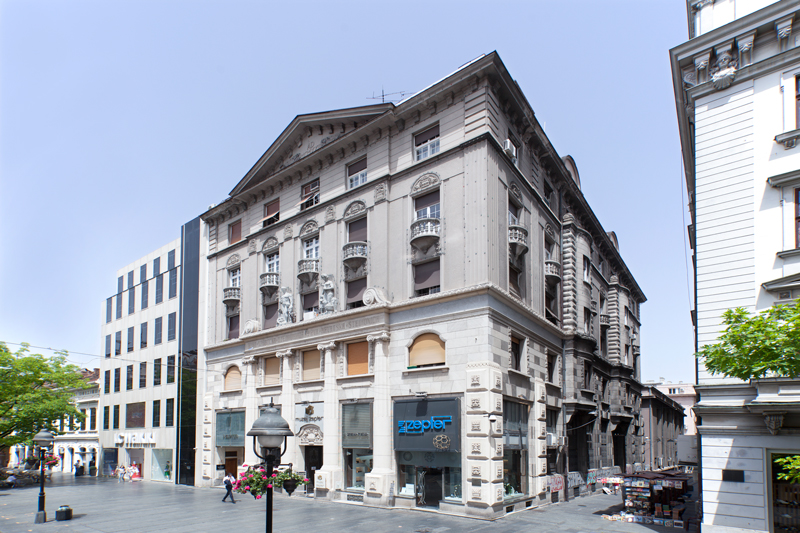 As the capital of the newly formed Kingdom of Serbs, Croats and Slovenes, Belgrade got a number of important buildings in the 1920s, designed in different architectural styles. A lot of foreign and local architects embellished the cultural and art centre of the town in Kneza Mihaila Street. The building which has been the seat of the ZEPTER MUSEUM since July 1, 2010 was designed by the Croatian architect Dionis Andrija Sunko. This magnificent edifice was built for the First Croatian Savings Bank.

The building was commissioned for a twofold purpose: the bank occupied the ground and first floors and the remaining three upper storeys were designed with different sized flats.

The building has three free standing façades and the most elaborate and decorative is the one overlooking Kneza Mihaila Street. It was modelled after multifunctional buildings of the Berlin Secession and is one of rare examples of Berlin and Hungarian Secession in Belgrade.
The interior was designed with particular attention and from the very beginning „it looked more like a museum, a gallery than an ordinary bank branch“.

In the „listing of cultural heritage this building has been marked as a monument of second category as a building of ambient value; this presumes that complex construction works can be undertaken and the functional organization space can be changed.“ Therefore, from the original bank building (and it served as such for decades) it has been turned into a museum building. And this is quite logical: both institutions are treasuries – one of money and the other of objects d’art.

The professional and aesthetically superb reconstruction of the space, without disturbing the ambience and spirit of the time when the building was erect but providing adequate space for the display of artworks was done by Studio Urošević from Belgrade.